We announce that you still can access the showcase of Trade Expo Indonesia Virtual Exhibition until December 10th, 2020.

You can explore various Indonesia's finest premium products and services! More than 690 exhibitors and more than 100 countries around the world join this year's Trade Expo Indonesia, giving opportunities to leverage Indoensian brand and product in international market virtually.

Get exclusive promos and offers from various local Indonesian products on 8-10 of August 2021 by shopping online at www.onlineasean.com. There will be more than 90 Indonesian Companies participating in ASEAN Online Sale Day 2021 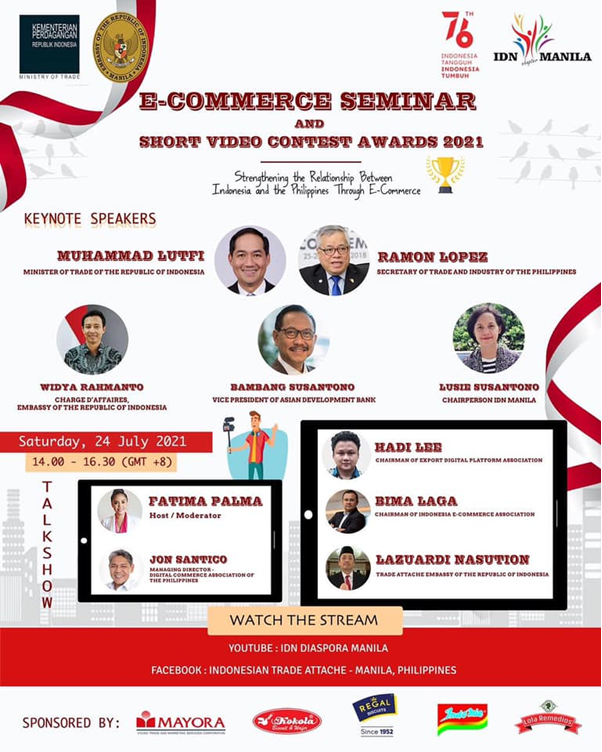 Indonesian Trade Attache in Manila Held E-Commerce Seminar and Short Video Competition, Attended by Minister of Trade of the Republic of Indonesia and Secretary of Trade and Industry Republic of the Philippines.

The Trade Attaché of the Indonesian Embassy in Manila together with the Indonesian Diaspora in Manila held an e-commerce seminar and short video competition on Saturday, July 24, 2021, at 14.00- 16.30 Philippine time.  The event was held in an effort to stimulate economic and trade growth amid the Covid-19 pandemic and strengthen Indonesia's diplomatic relations with the Philippines.

The seminar was held online, which carried the theme of strengthening Indonesia-Philippines relations through e-commerce.  The event was attended by the Minister of Trade of the Republic of Indonesia Muhammad Lutfi, the Secretary  of Trade and Industry of the Republic of the Philippines Ramon Lopez, and Bambang Susantono, Vice President of the Asian Development Bank.

On that occasion, Lutfi conveyed that the Covid-19 pandemic brings benefits to the world of e-commerce.  The digital economy will grow significantly, from about USD 40 million billion to USD 323 billion.  Meanwhile, Indonesia's gross domestic income is predicted to triple by the end of 2030, from USD 1.1 trillion to USD 2.8 trillion.

Meanwhile, the Philippine’s Secretary of Trade and Industry highlighted that the strengthening of Indonesia -Philippines relations will have a positive impact on the economies of both countries.  Lopez added that increasing the number of new consumers using digital technology in Asia, from 32 percent to 55 percent, will open up opportunities for Asia to lead the world's digital economy.

"The growth of internet users in Indonesia and the Philippines, which reached 37 percent, will open up great opportunities for both countries to strengthen the digital economy and open up a wider e-commerce market," said Lopez.

There were 882 registrants and 124 videos submitted to the committee.  The total prize in this competition is 250 thousand pesos or Rp 75 million which is a donation from five sponsors, namely Mayora, Kokola, Marie Regal Biscuits, Indomie, and Lola Remedios